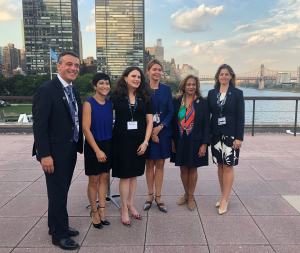 This week, SBF members along with a diverse delegation of over 20 government, academic, and community partners from Hawaiʻi are in New York for the UN General Assembly and first-ever Climate Action Summit to share Hawaiʻi’s story of sustainability action with global leaders

Pressing forward on Hawaiʻi’s carbon neutrality goal, 10 SBF members jointly invested $150,000 towards creating a carbon offset project in Hawaiʻi. Working with The Nature Conservancy (TNC) on a pilot 8,000-acre project in the Kona Hema forest on the Big Island, SBF anticipates the project will be launched in 2020. The project is estimated to generate 120,000 credits over the first 10 years that can be sold on the global voluntary market.  The IUCN World Conservation Congress that took place in Hawaiʻi in 2016 purchased offset credits from projects in Peru and India to offset the roughly 30,000 tons of emissions associated with the conference, as there were no local projects available at the time.

“A carbon offset program in Hawaiʻi will allow businesses, residents, and visitors to offset their carbon emissions by investing in protecting Hawaiʻi’s koa and ʻōhiʻa forests, as well as improving groundwater recharge,” says Ulalia Woodside, Executive Director at The Nature Conservancy of Hawaiʻi. “We are delighted to partner with the SBF to create a market-based mechanism that can accelerate investment in these natural resources and ecosystem functions.”

“We are excited to join other Hawaiʻi businesses to explore a possible new, green industry for Hawaiʻi that supports both the economic and environmental sustainability of our state,” said Peter Ingram, president and CEO of Hawaiian Airlines, one of the founding members of the SBF.

In addition to TNC, other landowners including the State of Hawaiʻi, Kamehameha Schools, and Pūlama Lānaʻi are also considering or planning to launch carbon offset projects.

“We are excited about this leadership from the private sector to accelerate momentum on our carbon neutrality goal and have been sharing lessons learned and forest carbon data across projects to help build a carbon offset market in Hawaiʻi together,” says  Irene Sprecher, Forest Program Manager for the DLNR DOFAW.

Improving energy efficiency is the first phase of SBF’s Green Your Business Initiative to lead by example. Each company’s progress, as well as SBF’s collective contribution are now tracked on the Aloha+ Dashboard (www.dashboard.hawaii.gov/aloha-challenge) as the “business sector energy efficiency” target under the Clean Energy Goal.

“Considering Hawai‘i’s commercial sector purchased 2.8 million MWh of electricity across the HECO territories for $843 million in 2018, even a 3% reduction would save our commercial and government sectors 84,000 MWh and $25 million.” says Brian Kealoha, Executive Director of Hawai‘i Energy.

In recognition of Hawaiʻi’s leadership in sustainability efforts nationally and internationally, Hawaiʻi Green Growth was invited by the United Nations to become the Local2030 Hub, and joined the United Nations Global Compact, consisting of more than 9,000 CEOs committed to implementing the SDGs. 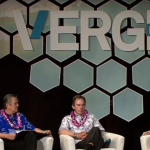 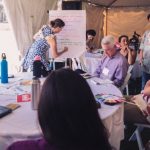